Agora Club is a service and friendship club for women from the age of 42 and older (Non Past Circlers) and 45 and older (Past Circlers) with different professions, hobbies and interests.  Like Ladies Circle, Agora has an International and a National board.  The clubs also have monthly meetings and each club individually decides how it will participate in “service”. The philosophy of service is not just helping in major service projects, but being ready and able to help people who are less fortunate.

Agora Club SA was chartered in February 2009.  Two clubs (Amarula 1 Louis Trichardt & Strelitzia 2 Johannesburg) and the National Board were chartered at the same time.  There is also now a third club, Kopano 3.

The first International Service Project was the Fish & Chips Babies Knitting Project, with Agora Ladies knitting Beanies, Booties and Vests, and taking them to ACI Meetings to hand over to African Agora Clubs.  These knitted items were then handed out to state hospitals, clinics and other communities.  ACI Ladies are still knitting and bringing the items to ACI Meetings!

The next International Service Project was Eyes for the World, which was initiated in Belgium.  EFTW provides self-adjustable spectacles which allow users to alter the power of the lenses in order to correct their own eyesight.  Projects have been run in South Africa, Botswana, Zimbabwe, Zambia, Madagascar, Morocco, Brazil, Nepal and India, organised by Ashwini Surendar and Ladies Circle India.

This last year, our club projects and activities have included: supporting the SPCA, Old Age Homes, a Salvation Army Home for Girls and an Orphanage.  Strelitzia assisted the MOTHs Cottages at their Fundraising Fete and Jumbe Sale.  Agora Ladies have donated food parcels, Christmas Boxes and food to make sandwiches on the World Day of the Poor.  We have collected and distributed household items, clothes and toys that friends were clearing out and distributed more Beanies and Booties to hospitals and homes.

Our year finished on a festive note with our National AGM at the Waterberg Game Park. 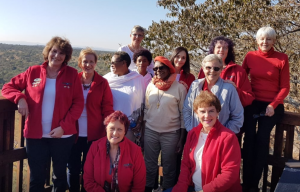