Spring Day 2018 marked the first 5km charity walk hosted by El-Shammah, home for abandoned babies, and LC6 and friends were there in full support. The day was very touching and impressive as about 200 people, some with their four paw companions at their side, joined the walk in aid of raising money for El-Shammah. After the walk was opened in prayer by the home’s founder and head, Allistair Scholtz, LC6 (Natasha, Cheslyn, Yvette and Chantess) and team (Graham (RT 253), Candice, Desre and Shelley) set off weaving our way though the streets of Primrose, passing the El-Shammah home on the way and was rewarded with a commemorative medal at the finish line.

At R50 per person, the home raised at least R 4,000 on the day in entrance fees, however the real success of the day was the awareness which was created for the home. Since the walk, El-Shammah has received an increased amount of donations with much needed additional publicity to ensure further donations come their way.

The day provided LC with more than just service and exercise as our National Ladies Circle shirts, which we sported on the day, drew much attention from the fellow walkers. After explaining how amazing our organization is to those who inquired, LC6 gained the interest of two ladies who have since joined LC6 as guests.  Such a successful day for everyone. 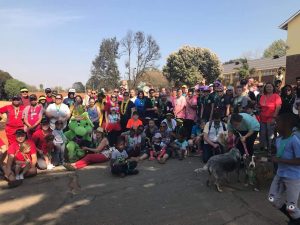