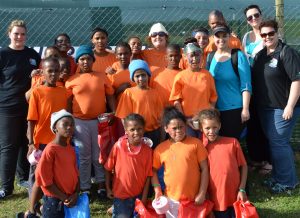 If you looked to the skies over George and listened carefully on Saturday 5 December, you would be forgiven to say that you heard the faint sounds of laughter and joy being carried by the wind… perhaps you would even have heard a ho ho ho or two.

A group of 88 children took to the skies in the fifth Santa Flight project on Saturday run by six service clubs in George.

“We want to create lifelong memories so that children who experience this party are able to carry the joy and uniqueness of the experience for the rest of their lives,” said Eden Lions Club member Rick Clutton, the Santa Flight convener.

The children who benefited from a 15 minute flight over the sea and surrounding area were from the ACVV Môreson Kinderhuis in Denneoord, Mzoxolo Primary School in Lawaaikamp, Van Der Hoven Primary in Sinksabrug, Ruiterbos Primary (Garden Route Ladies’ group – photo attached) in Mossel Bay and Herbertsdale Primary School between Mossel Bay and Riversdale.

The idea came from Clutten who was involved in a similar project at Manchester Airport in the UK. “Bringing the idea to George five years ago was very challenging as in Manchester we used one aircraft for all the children.We are thankful for the Flight Training College at the George Airport who made it a reality.”

Four light aircraft, sponsored by pilot and Rotarian Philip Gibbs as well as the George Flight Training College, were fueled, ready and waiting for the children. Brenda Vorster, George Airport manager, waved all airport costs for the project. 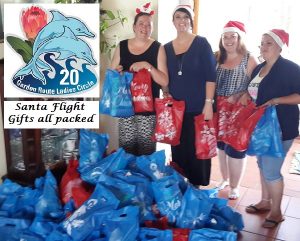