Loskop Ladies Circle 21 in cooperation with Pick ‘n Pay, Bareki Mall, Loskop Round Table 233 and Voetspoortjies Pre-primary School as well as several cupcake angels who baked cupcakes in the Loskop Valley had a very successful National Cupcakes 4 Kids with Cancer day on 27 September 2014.

The project took place in 55 malls all over South Africa.  Several Ladies Circles participated in the project and Bareki Mall in Groblersdal was one of only two malls in Limpopo Province who participated in the project.  An amount of R1.2 mil funds were raised throughout South Africa for children diagnosed with cancer.  R13 350.00 of this R1.2 mil was raised by the small Groblersdal community!   Loskop Ladies Circle 21 wants to thank each and every organization and individuals who participated and supported this project.  Every baker, sponsor, volunteer and those who supported the project made it possible to help these children.

The preparations for this big day already started as early as March.  Bakers, some of them well known in the Valley, all contributed to the project by pledging their cupcakes early in April.  All of these Cupcake Angels were kept on par right through the whole process up to National Cupcakes Day.  It is amazing to see the talents in the Loskop Valley Lodge since these cupcakes looked too beautiful to eat!

Loskop Ladies Circle 21 coordinated the project and Pick ‘n Pay in Groblersdal was the main sponsor.  Pick ‘n Pay with the help of Veronica and her team provided 1000 cupcakes on National Cupcakes Day.  The tables were cheerful decorated and many volunteers helped making this project a huge success.  Many of the cupcakes were already delivered on the 26th of September where it was distributed to schools and businesses who ordered it.

The day was so much fun in the Bareki Mall where there was also a Cupcake Docrating competition held.  Veronica of Pick ‘n Pay gave a cupcake decorating competition where after the kids were given an opportunity to show how they can decorate.  Two very well known bakers in the Valley, Tina Stylianou and Willemien Kotze had the difficult task to judge the cupcakes.

This is definitely a project that Loskop Ladies Circle 21 will do again next year! 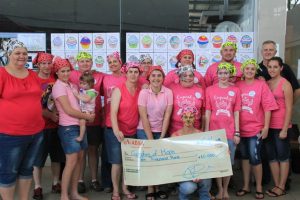